Notification: UNESCO Inscribed on the Representative List of Intangible Cultural Heritage of Humanity

Society for the Preservation of Traditional Kanazawa Gold Leaf

There are two grades of gold leaf produced and sold in Kanazawa. The first, called entsuke gold leaf, has a history of over four hundred years and is made using traditional techniques and materials. The second, called tachikiri gold leaf, uses modern processes and materials such as carbon-coated glassine paper. While traditional gold leaf is more labor-intensive, it is almost exclusively preferred over modern gold leaf for the restoration of National Treasures and Important Cultural Properties.

Although the two have numerous differences, a distinguishing feature of traditional gold leaf is the use of handmade washi paper in the goldbeating process. This specially prepared paper has a crucial impact on the quality of the finished gold leaf, and more time and effort are spent on the preparation of the paper than on any other step in the process. 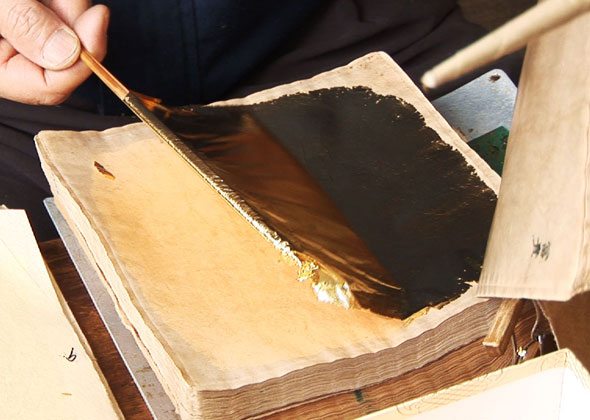 Today, shifting lifestyles and an economy based on mass production for mass consumption have led to the decline of many traditional practices. Gold leaf production is decreasing, and veteran goldbeaters struggle to find successors to carry on the craft.

Producing a single sheet of entsuke gold leaf requires years of experience and specialized tools. However, the knowledge and skills passed down for generations are now in danger of disappearing, and this vital piece of traditional culture may be lost. Training new practitioners to preserve these techniques and skills for future generations is of utmost importance.

To this end, we have founded this society to help preserve the skills and knowledge required to produce entsuke gold leaf and unite the practitioners of our craft to overcome these challenges together.

Entsuke gold leaf is used as a decorative material in architecture, fine arts, and crafts. It is essential for the restoration of National Treasures and Important Cultural Properties. 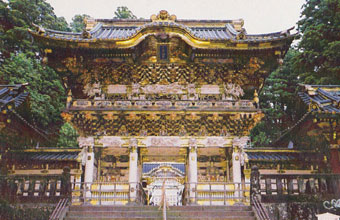 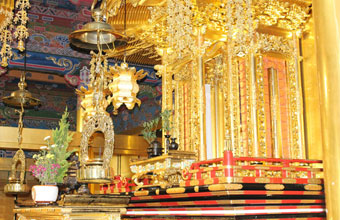 Gold leaf is gold that has been hammered into incredibly thin sheets only 1/10,000 of a millimeter thick. Almost all of Japan’s gold leaf is produced in the city of Kanazawa.

Gold leaf is made by stacking thin ribbons of gold between sheets of goldbeating paper to create a packet. A goldbeater then uses a mechanized hammer to methodically beat the packet, causing the gold to flatten and expand into thinner and thinner sheets over repeated stages of hammering.

Entsuke (lit. “bordered” or “framed”) gold leaf has a history of over four hundred years. The name refers to how the finished leaf is sold on a sheet of paper large enough to create a border around the gold. While many of the world’s goldbeating traditions use animal membranes or mylar, entsuke gold leaf is beaten between sheets of washi paper. This special goldbeating paper (uchigami) is made from the fibers of the ganpi shrub and treated with naturally produced straw lye and persimmon tannins. The finished leaf is carefully checked one sheet at a time and cut to a standard size and shape using a bamboo tool. 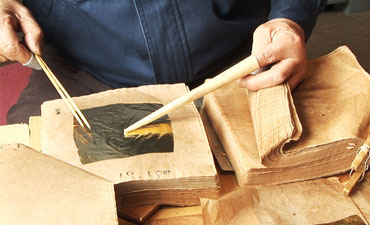 Tachikiri (lit. “cut”) gold leaf was developed in the late 1960s. In place of the traditional washi goldbeating paper, tachikiri gold leaf uses industrially produced glassine paper for the goldbeating process. The finished packet of gold leaf is cut into a square—paper and all—removing the edges and giving the leaf its name.

Gold is a precious metal, and its value is recognized throughout the world. Gold leaf was developed as a more economical way of using gold for decorations, utilizing the metal’s innate malleability to produce extremely thin sheets capable of covering larger areas with less gold.

An important characteristic of entsuke gold leaf is that the quality of the gold remains unchanged in the finished leaf. Traditional goldbeaters tirelessly refine their craft, working to produce thin, evenly stretched sheets of the highest quality.

Among specialists, entsuke gold leaf is praised for its soft appearance, luster, and edge quality—although for most people, distinguishing between entsuke and tachikiri gold leaf based on appearance alone is difficult.

Finally, entsuke gold leaf is made entirely with natural materials. As a result, entsuke—rather than tachikiri—is used for edible gold leaf products. 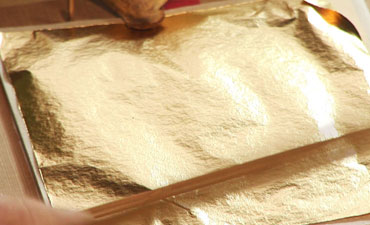 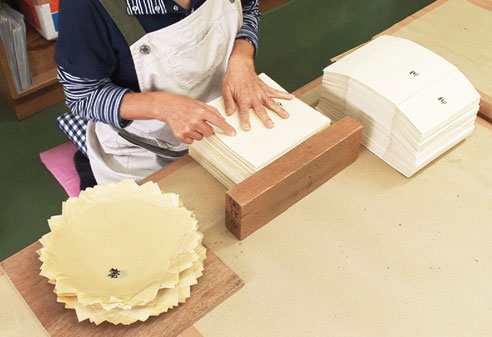 History of Gold Leaf in Japan

Early examples of gold leaf in Japan include the seventh-century statues of the Shitennō (Four Heavenly Kings) at Horyuji temple, and the murals in the Takamatsuzuka burial mound. An iconic example from the late Heian period (794–1185) is the Konjikidō at Chūsonji temple in Hiraizumi. The Konjikidō (“Golden Hall”), completed in 1124, is said to be the model for the legend of “Zipangu, the Land of Gold,” as told by the thirteenth-century Venetian explorer Marco Polo in The Travels of Marco Polo.

Looking to the Edo period (1603–1867), the Nikkō Tōshōgū shrine is another renowned example of gilded architecture. The impressive Yōmeimon (“Sun Bright Gate”), which was recently restored, is gilded with 200,000 sheets of gold leaf.

Different appearances can be achieved depending on how the leaf is applied. While it is common to affix the gold leaf to urushi lacquer, animal glue is also used for gold screens and other objects. Lacquer can be burnished or finished in a variety of ways to affect the appearance of the applied leaf. For example, in some parts of Japan, Buddhist altars are gilded using a technique called omo oshi; the gold leaf is applied over a relatively thick coat of lacquer to produce a subdued, matte finish. In other regions, the lacquer is almost entirely removed to produce a mirror finish when gilded.

Japanese gold leaf can be applied in a wide variety of ways depending on the tastes of the region or the individual applying it.

How Traditional Gold Leaf is Made

Gold leaf is made by stacking thin ribbons of gold between sheets of handmade washi paper to create a thick packet. A goldbeater then uses a mechanized hammer to methodically beat the packet, causing the gold to flatten and expand. The expanded gold is divided, and the process is repeated until the sheets of gold are just 1/10,000 of a millimeter thick.

For the initial goldbeating stage, goldbeaters known as zumiya cast gold ingots to be made into gold leaf. The ingots are then rolled into a thin ribbon and beaten to a thickness of 1/1,000 of a millimeter. The resulting thick leaf is called zumi. This is then given to goldbeaters known as hakuya for the final goldbeating stage to produce the finished gold leaf (haku), which has a thickness of only 1/10,000 of a millimeter.

Goldbeating paper is essential for each step of the process. Both zumiya and hakuya purchase paper from traditional papermakers, which they then treat and mature in a process called kamijikomi.

History of Gold Leaf in Kanazawa

1593
Maeda Toshiie (1538–1599) orders the production of gold and silver leaf during his deployment to Korea. (Gilded roof tiles have been unearthed at the ruins of Kanazawa Castle Imori Moat and other excavation sites)
1667
The shogunate strictly regulates gold leaf, making it illegal to produce.
1696
Domestic production and sale of gold and silver leaf are restricted to the metal leaf guild Hakuza, established in Edo (present-day Tokyo).
1808
Kanazawa Castle burns down. Hakuya Isuke invites goldbeaters from Kyoto and produces 16,000 sheets of 12 cm2 gold leaf for the reconstruction effort.
1819
Yasudaya Sukesaburo of Zaimokucho and his apprentices produce leaf for the Takezawa Palace.
1864
Kanazawa establishes its reputation for gold leaf.
1868–1912
Demand for gold leaf increases beginning in 1872–3.
Gold leaf production ceases in Tokyo. Superior technique and local water quality, which allowed for better goldbeating paper, paved the way for Kanazawa’s monopoly on metal leaf.
1915
Miura Hikotarō (1869–1939) completes his mechanized goldbeating hammer.

Society for the Preservation of Traditional Kanazawa Gold Leaf